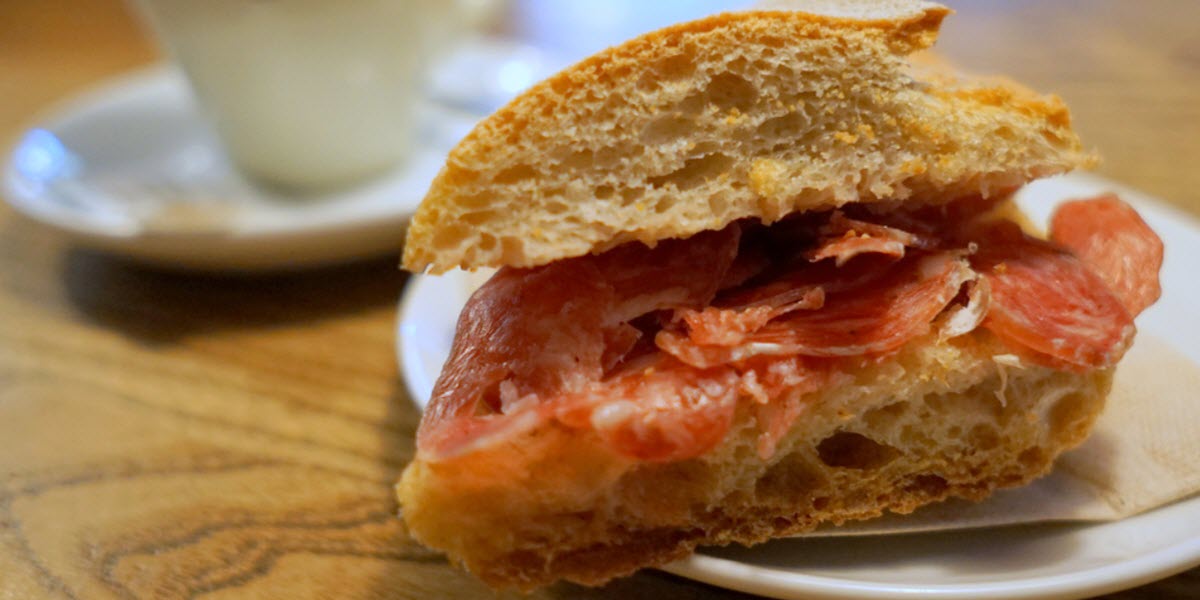 In Spain, the word sandwich – borrowed from the English language – is only used for the dish when it’s made with classic English sandwich bread. Other types of dishes where bread is topped with one or more ingredient is more likely to be referred to as bocadillos.

One example of a dish that an English-speaker would probably call an open-faced sandwich while a Spanish-speaker would consider it a bocadillo is pa amb tomáquet (“bread with tomato”) – a traditional food throughout Catalonia. It consists of bread rubbed with garlic, tomato, salt, and olive oil.

As with most traditional dishes, there are many recipes and methods for making pa amb. Here is one of them.

If you are serving this dish to guests, each guest should be provided with toasted bread and the ingredients, and then apply the ingredients to their own liking.

The term sandwich was coined in England in the 1700s. Before that, the English would simply say “bread with meat”, “bread with cheese”, and so on, depending on the exact ingredients.

The sandwich is named after John Montagu, 4th Earl of Sandwich. Sandwich is an old town and civil parish on the River Stour in Dover, in the south-eastern part of England. The name, which has been in use (with varying spellings) since at least the 9th century AD, is derived from sand + -wīc. The Anglo-Saxon word -wīc denotes a dwelling or fortified place where trade takes place. So, the place was known as Sanwic (in 851 AD), Sandwic (in 993 AD) and Sandwice (in 1086) was a market town or similar on sand or sandy soil.

So, why to we call bread with toppings “market town on sand”? Because the English 18th century statesman John Montagu, 4th Earl of Sandwich liked to eat slices of meat between two pieces of bread.

Exactly how he came to give his name to this dish is up for debate. The most widely retold story of the events alleges that Lord Sandwich was such an avid cribbage player that he would refuse to take a break from the gambling table to eat. Instead, he would order slices of meat and instruct the servant to place the meat between two pieces of bread. This was a dish that Lord Sandwich could easily eat at the table using just one hand, and without getting his fingers greasy. (Marking the cards with grease would have been awful.) Eventually, his fellow gamblers started ordering “the same as Lord Sandwich” and this was the shortened to simply “a sandwich”.

It is impossible to say for sure if this story is true but it can not be denied that the sandwich is the ideal food to eat at the casino table and it is easy to see how other gamblers would start to mimic his order.  The sandwich remains one of the best foods to eat at the casino table and at the home computer.  This is true regardless of whether you are using your computer to work or to play in one of the many online casinos that offer casino gambling online. There are many Spanish online casinos to choose from, but if you are living in the US, then our choices are more limited as most online casinos doesn’t accept US players.  Examples of casinos that accept US players include Bovada  and Fortunejack casino.

The main reason to chose to eat sandwiches at the casino table ( or computer) is that they keep your fingers clean but another important reason is that you can prepare the sandwiches in advances and let them sit until you get hungry.  This allows you to have a meal even if there is no one around to prepare it when you want it.