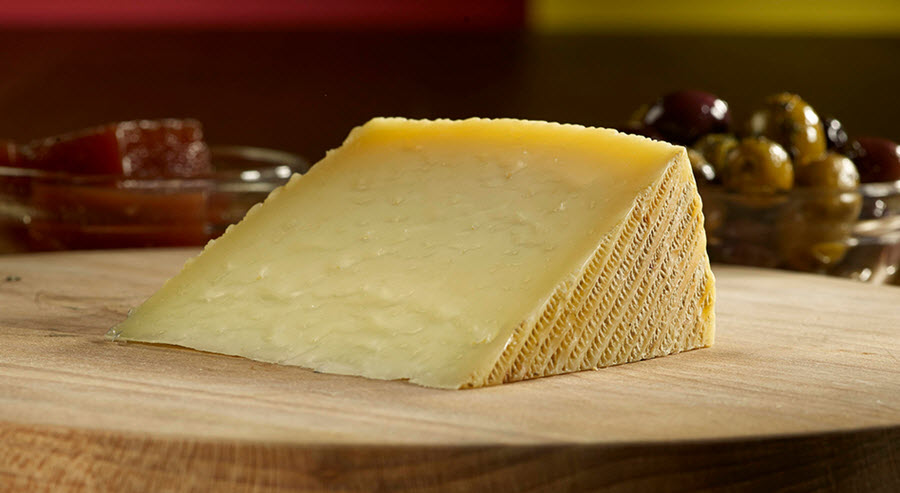 Manchego cheese (queso manchego) is a Spanish hard cheese made in the region of La Mancha from milk coming from sheep of the manchega breed. Manchego cheese is protected under Spain’s Denominación de Origen (DO) scheme, and has also been granted Protected Designation of Origin (PDO) status by the European Union.

Within Europe, only cheese that fulfil the strict requirements for manchego cheese is allowed to be sold and marketed as manchego cheese. Outside the European Union, this protection doesn’t exists, and that is why we can find a lot of different cheeses labelled Manchego that isn’t actually manchego cheese according to Spanish and EU law.

One example of this is how many of the cheeses sold as manchego in the United States aren’t made from milk coming from sheep of the manchega breed. As a matter of fact, many “manchego” cheeses in the U.S. aren’t even made from sheep’s milk – they are cow’s milk cheeses.

If you want to buy genuine manchego cheese in the United States, make sure that you buy a cheese that is imported from Spain and that carries the DO and/or PDO mark. This usually means that you have to go to a really well-assorted grocery store or a special cheese shop. It is also quite common for shops specialising in Spanish delicacies to sell real manchego.

Outside the European Union, plenty of the cheese sold as manchego doesn’t adhere to the Spanish standard for manchego. These pretend manchegos can for instance be made from cow’s milk instead of milk from manchega sheep.

If you want the real deal, buy Spanish manchego cheese with the DO and/or PDO labelling.

It is also helpful to know that a real Spanish manchego is made in a cylindrical mould with maximum diameter of 22 cm and a maximum height of 12 cm. There is an (inedible) rind on the outside, featuring a traditional herringbone basketweave pattern. The top and bottom of the wheel are pressed with wheat ear patterns, and are divided by lines into four equal parts.

A real manchego has been aged in one of the natural caves in the La Mancha region of Spain. This ageing of a manchego has a huge impact on its flavour and texture, it is therefore interesting to try out several different manchegos with varying ageing.